Notwithstanding that the Channel Island of Jersey's castles and forts had been garrisoned by British forces for some 740 years to defend them against French attack, it was the Jersey Militia comprised of islanders, who had the job of protecting the civilian population and the Island as a whole. The British Channel Islands are a small group of islands in the English Channel only a few miles from the French Normandy coast, and at least since 1337, all men between the ages of 16 and 60 had to serve in the Jersey Militia.

In June 1940, following the defeat of the British Expeditionary Force in the face of the German blitzkrieg and the evacuation at Dunkirk, the Channel Islands waited with great apprehension to see whether the war would reach them. The Jersey Militia, now voluntary since the First World War, had been preparing since the outbreak of war to defend the Island, albeit with little in the way of equipment, arms and other resources from mainland Britain.

The question now was, whether Britain would or could defend the Islands at all having lost so much equipment at Dunkirk and in the face of imminent invasion along its own southern Channel coast? There were also British troops still left in France, fighting rear-guard actions and they would almost certainly need to be evacuated soon in order to preserve some chance of defending Britain. During the week beginning Monday 10th June, discussions were taking place at the War Office and within the British Cabinet as to what to do. Although the Channel Islands were British territory, there wasn’t much support for any planned reinforcement of the Islands’ very small garrisons except possibly sending a battalion to each of Jersey and Guernsey to defend the airports which might assist retreating troops in France, and possibly their eventual evacuation.

As it turned out, neither of those battalions were sent, and the only steps taken were to move troops from the machine-gun training school based in Alderney to each of the larger islands’ airports later that week. However events elsewhere were already beginning to overtake matters, and Operation Aerial, the evacuation of the remaining British forces in France, commenced on 15th June. On the 16th June, a request was made to the St Helier Yacht Club to send boats to St Malo to help with that evacuation in much the same way as Dunkirk, but on a smaller scale. 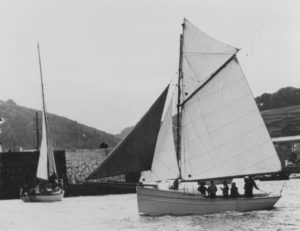 A small flotilla of local yachts and boats duly left for St Malo the following day. Islanders thought that the men evacuated from St Malo would be brought to Jersey and the other Channel Islands to defend them. They were disappointed! Some did arrive, but most passed the Islands by and were ferried straight to England. The military chiefs in Britain had already taken the effective decision to demilitarize the Channel Islands and evacuate all remaining troops. Meetings took place between representatives of the Islands and the British Government in London on the 18th June, when it was clear that the much feared decision to leave the Islands undefended, was indeed true. All military personnel were to be evacuated and the Islands de-militarised. The civilian population were also to be given the opportunity to evacuate on ships to be supplied by the British Government for that purpose.

Back on the Islands, troops* began leaving for England immediately, with the last leaving Jersey and Guernsey on board the SS Malines and SS Biarritz respectively on 20th June.  In the meantime, the civilian population endured a very stressful few days. They had to decide – to stay or to go?

If it was the latter, it meant dropping everything, queuing up for hours to register to get a place on a departing ship, and then waiting at the docks for it to arrive. In the chaos of trying to sort out affairs before departing, meals were left unfinished on kitchen tables, livestock left in fields and cars and prams abandoned on the quayside. Residents waiting to evacute from Jersey in June 1940

All in all about a half of the Guernsey population left, all of Alderney’s and about a fifth of Jersey’s. Jersey’s Bailiff (head of the Island) had urged Islanders to stay as he intended, which resulted in fewer people evacuating. Similarly, the tough feudal leader Sark, Dame Sibyl Hathaway, had made a similar plea and no one evacuated from Sark. Ship packed with evacuees from Jersey in June 1940

Returning to the Jersey Militia, it was disbanded after service defending their Island since 1337, and its 11 officers and 191 men left on the SS Hodder on the 20th June. When former Jersey Militia men arrived in England, they went on to form the nucleus of the 11th (Royal Militia Island of Jersey) Battalion of the Hampshire Regiment. The Jersey Militia had proved their worth in the past with recorded battles in Jersey over the centuries including ones in 1406, 1549, 1651, 1779 and 1781. They had also fought overseas in the First World War with distinction. But now the battles for the Jersey Militia men in their new regiment would last 5 years before being able to return to their homes.

On the 24th June, with the evacuations complete, the Bailiffs of Jersey and Guernsey received a message from King George VI:

For strategic reasons it has been found necessary to withdraw the armed forces from the Channel Islands. I deeply regret this necessity and I wish to assure my people in the Islands that in taking this decision my Government has not been unmindful of their position. It is in their interest that this step should be taken in present circumstances. The long association of the Islands with the Crown and the loyal service of the people of the Islands have rendered to my ancestors and myself are guarantees that the link between us will remain unbroken and I know that my people in the Islands will look forward with the same confidence as I do to the day when the resolute fortitude with which we face our present difficulties will reap the reward of victory.

* Accompanying the troops, who were based in and then evacuated from the Islands, were their families. My grandfather George Yates had been the Sergeant Instructor at the RASC Boys Army School in Jersey, and being a local soldier, he left on the troopship with my father and uncle, as well as my grandmother pregnant with my aunt.