To understand the impact of the German Occupation and the massive construction project undertaken to make the Channel Islands impregnable, you need to appreciate how the Islanders were affected and how much their daily lives changed. The Channel Islands Military Museum gives us some insight into that. The Channel Islands Military Museum is a time capsule for those interested in the history of our recent past and is housed in a former 10.5cm gun casemate which once formed part of Hitler’s Atlantic Wall defences along the coastline of St Ouen’s Bay, Jersey.

The Channel Islands Military Museum contains a lifetime’s work of collecting German Occupation items and related militaria. The collection allows visitors the opportunity to see items, many of which are still in the same condition as when they were when last used over 70 years ago. The museum contains many very personal items which have been acquired from or donated by original owners. These include personal letters and documents which give an real insight as to how the Islanders were affected by the Occupation and the massive fortification program. See copies of the original ultimatum demanding surrender which the German Luftwaffe dropped onto the Island on 1st July 1940. You can also see the first orders of the occupiers posted the following day. Whilst strict, those orders nonetheless reflected the German orders to respect the local population, and which were to be a model for the future planned occupation of Britain. The mood soon changed however as the hardship of occupation began to bite. 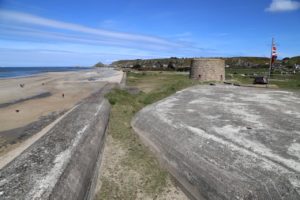 There are also stories from old soldiers who have returned to Jersey – both Germans who occupied the very bunkers built 75 years ago as well as Allied airmen who had the unfortunate experience of finding themselves prisoners here.

With the museum’s exhibits being displayed in one of Hitler’s former Atlantic Wall bunkers, helps visitors to get a true feeling for those dark days of the 1940s.

The museum recently celebrated its 20th anniversary and to mark that milestone it has added many previously unseen items to the displays. The Channel Islands Military Museum is one of Jerseys premier military history and German Occupation attractions not to be missed. CI Military Museum – concrete mix of stone from all over Jersey