A really interesting historical site in Saint Malo (Saint Servan), France dating from the Roman period, although the most obvious relics of its past are the extensive WW2 German fortifications making it one of the most significant elements in Festung St Malo.

Having a couple of hours to spare in St Malo before catching the ferry or the train, the Fort de la Cité d’Alet, St Malo is well worth a visit. For those who have an interest in the international boundary and front line which existed in the area around the Channel Islands between warring England / Britain and France over the seven and a half centuries, it’s a reminder of the defences the French put up to repel frequent English raids.

For those with an interest in twentieth century history, it’s a massive German fortified position to defend St Malo, the Germans’ main gateway from occupied France to the occupied Channel Islands, from Allied attack.

The area of la Cité d’Alet dates back to the Roman period when the promontory was topped by a fortified town, of which little remains except a few small sections of “Roman” walls. By the end of the seventeenth century, it was known as “la Cité d’Alet” and was fortified by a gun battery to protect the entrance to the Rance river. 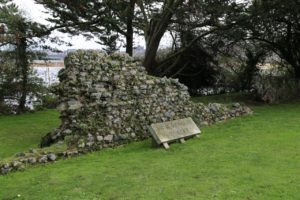 Vaubin, the well-known French Inspecteur Général of Fortifications from 1678, was, however, not satisfied by the defences of la Cité d’Alet, and he advised that additional mortars to be mounted. Apparently, this advice was not followed.

It was not until the next century when in 1759, during the Seven Years War, after numerous English incursions into the bay of St Malo, the decision was taken to build a very large artillery fort at the Cité d’Alet, capable of defending not only the bay, but also the town, the port, the Rance estuary as well as the area to the rear. That fort built by Mazin, the Chief Engineer of St Malo is still very much in evidence today, albeit that it now has some significant twentieth century additions. Those additions, built by the Germans after June 1940 and the fall of France, dwarf the original fort in scale. St Malo, quickly appropriated by the Kriegsmarine as the primary port for the supply of the occupied British Channel Islands, saw extensive fortification from 1941 onwards as part of Hitler’s Atlantic Wall to become “Forteresse St Malo” or “Festung St Malo”. By that time, the German occupied Channel Islands had become an obsession of Hitler, with him vowing that they were never to be returned to Britain when final German victory came, and destined to become part of the German Thousand Year Reich forever.  As a result of that obsession, a staggering one twelfth of all the cost and materials expended in building the whole of the Atlantic Wall (i.e. from the Artic in Norway all the way down to the French/Spanish border) was ploughed in the Islands! It is therefore hardly surprising that the French port which served those islands was also destined to have more than its fair share of fortifications.

Around St Malo, La Varde, Saint-Ideuc, la Montagne Saint-Joseph, la Garde Guérin were all fortified, as were the islands of Grand-Bé and Cézembre (more of the latter later). But probably the most important element of the fortress was the Cité d’Alet.

From 1942 to 1944, the promontory became a huge building site into which tonnes of reinforced concrete were poured. Incorporated into la Cité was an artillery battery with a range-finding position, a fortress PC, extensive defensive positions, 1350 metres of underground tunnels and shelters for about 200 men.

All in all, there were a total of 32 bunkers built and 8 heavy machine gun turrets (Sechsschartentürms) installed. The latter 50-ton 6 port armoured steel cupolas, mounted with MG 34s, were reserved for those places deemed by the Germans to be at most risk from Allied group attack.

The Cité d’Alet saw severe bombardment in August 1944 at the hands of the American forces who had entered Brittany from Normandy on 31 July. By the 4th August, the Americans headed by the 83rd Infantry Division had reached St Malo and by the 9th August, the city and the Germans in it, were encircled. It took two murderous infantry assaults by the Americans, as well as blanket bombing which left the fabulous old walled city of St Malo in ruins, before the German defenders surrendered on 17th August. The last remaining Germans of the Fortresse St Malo, held out on the island of Cézembre until early September, partially supplied from Jersey, until ground and aerial bombardment, including the first use of Napalm, forced their surrender. The most striking things that you will see at the Cité d’Alet are the armoured steel turrets along what is a very picturesque walk around the promontory. They are literally peppered by shell fire. But the vast majority of the shell fire is not as a result of the battle which raged around St Malo for nearly two weeks. No it’s a demonstration of the strength of these turrets, as after the battle, the Americans brought up various tanks and other anti-tank weapons into range and fired at them to see how much punishment they would take. It is incredible to see that virtually all the hits show shells bouncing off or merely embedding themselves into the armoured steel without penetrating it. I found only one shell hole which had penetrated the cupola straight through, whilst one other shell appears to have found a way in at the point where the moveable gun port shield slots into the turret.

An interesting thing also seems apparent when you compare the direction from which the US shots have been fired at the first two turrets as you come to along the path at la Cité d’Alet . Whoever was firing at each of these two turrets was doing so from different positions – my guess is one was below the old city walls and the other, several hundred metres away, was on the beach at St Servan, the adjacent area next to St Malo. Were the two different sets of gunners having a competition perhaps? I don’t know but perhaps somebody else does know? 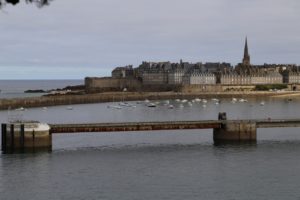 Finally, in the interior of the old fort of la Cité d’Alet, you can clamber around different battle-scarred bunkers and gun positions, as well as visiting the “Memorial 39-45” housed in the bunkers which have been built into the ancient walls. Unfortunately, on the day of my “spare time” visit, the museum was only open in the afternoon. Open regularly everyday only in July and August, it’s generally afternoons only in the shoulder months of April, May and October (closed Mondays) and the same afternoons and Sunday mornings in June and September. November to March, it is closed.